I know this was probably confusing, so let's go over it in detail.


Again, scope is the word we use to describe the ability to access certain variable names in a certain place in our code.  Languages vary on how scope works, but we'll stick with python.

So far, we've learned about two kinds of scope: function scope and global scope.  The two are separate from each other, but there are ways to cross over, but first let's explore what scope means for our programs.

Open a new file and save it where you want (I recommend calling it "scopeTest.py" and putting in a folder called "tests").  Lets start by creating a function and a few variables in various scopes. 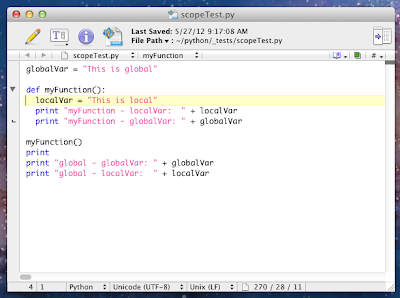 Can you figure out what will happen?  Let's run it and see if you're right. 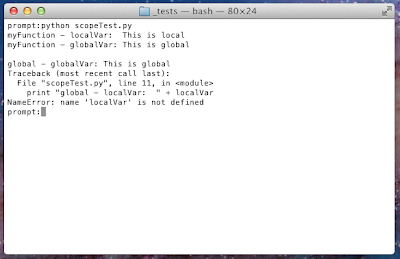 Oops.  We couldn't access the variable localVar outside the function.  Ok so let's get rid of the line where we print that out

Now let's make things a little trickier.  Let's change our function to this. 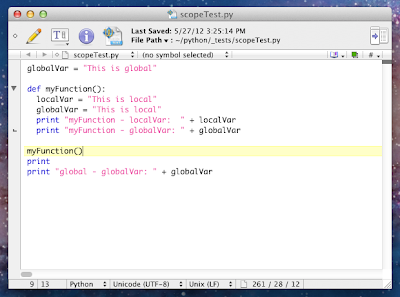 Ok now let's run it and see what happens. 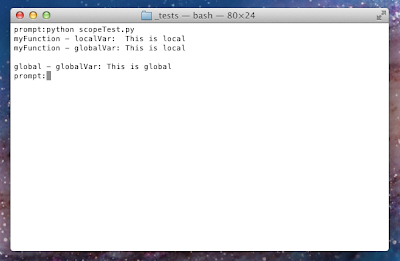 Surprised?  In one place, globalVar was one string, and in the other it was a different one at the same time.  Apparently, when you assign to globalVar inside the function, Python creates a new variable with function scope and hides or shadows the global-scope globalVar.  In order to access the global version of globalVar, we need to add this line underneath the def line. 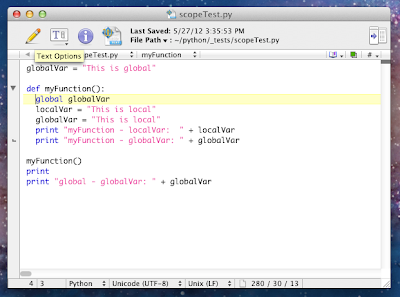 That should do it.  Now run it. 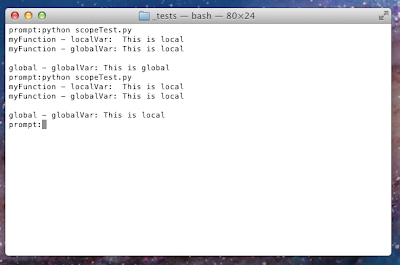 There we go.  Now when we assign "This is local" to globalVar, we're assigning it to the global version.  You must do this whenever you want to assign to a global variable inside a function.

I hope that clarifies a few things for you about scope.  I know it's just another thing to get your mind around, but trust me: it's not that difficult once it clicks.  All these things make sense together; it just takes a little practice.

A Word of Caution

Please be careful when you program. I don't think you have to worry about the scripts found on this blog, but you never know. Computer programming is a powerful tool, but it can be misused as well. To that end, I admonish you to be careful. Save copies of all data you intend to modify with your programs because once the data is gone, it's gone. Save often.

T R Bradshaw
Check out my website at bradshawcreations.com